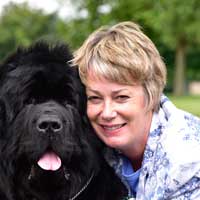 The Southern Newfoundland Club held its 3rd Championship show on the 24th November, the last event in the SNC calendar to be held for 2018.

We a great entry of 119 dogs making an entry of 138 for our judges, dogs - Mrs Anita Al-Bachy (Aarnikarhan) from Finland and bitches - Mrs Camilla Gothen (Ursula) from Denmark.

Judging commences at 10.00am and during the break for lunch, our chairman was the auctioneer in which beautiful newfie gifts were sold and the proceeds going to welfare.

Into the afternoon, judging re-commenced and then for the top honours to be awarded. Dogs first and the CC was awarded to Zentaur Der Kapitan Wisperedomen JW ShCM owned by Mrs E Dickerson and Res CC awarded to Int, Bel, Pol, Ger. Ch. Twillin Gate Oulare Soulyman owned by Mr & Mrs Bogaerts. For the bitches, the CC was awarded to New Angels Pretty in Pink JW ShCM owned by Mrs H Webb and the res CC going to King Helluland Material Girl owned by Mrs & Mrs Milburn. Our referee for the day, Mrs Juliet Leicester Hope was on standby but the judges agreed between them that Best in Show would be the DCC winner and Reserve Best in Show going to the BCC winner.

As always, thank you to all who supported our show – visitors and exhibitors. Also a special mention and our thanks to the stewards, Arron Humphries, Lewis Modbd, and to Mike Brind and Ms Robyn Burnett. To Paul Dodd, photographer and to the SNC committee including our Secretary who throughout the day remained at her table with laptop to upload the class results as they were awarded on the SNC website! 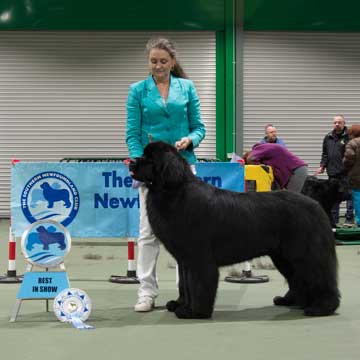 Reserve Best in Show
Best Opposite Sex in Show 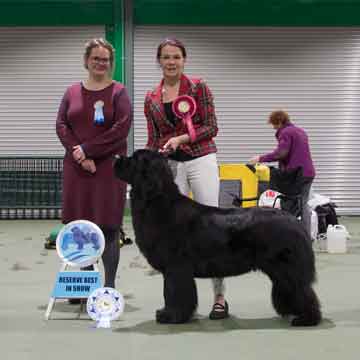 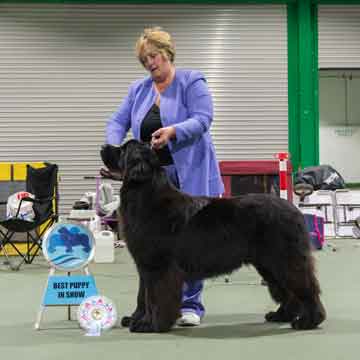 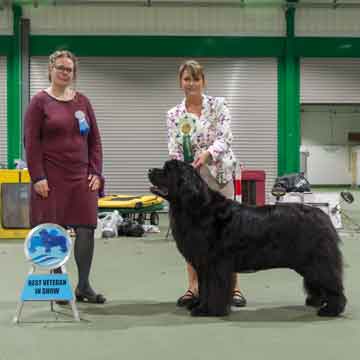 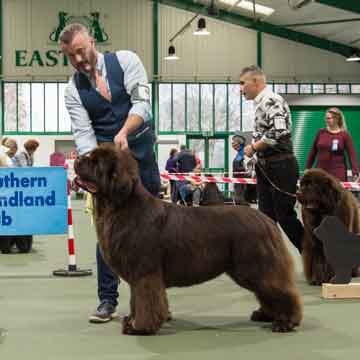 Ir. Ch. Kenamu Given The Gaunlet 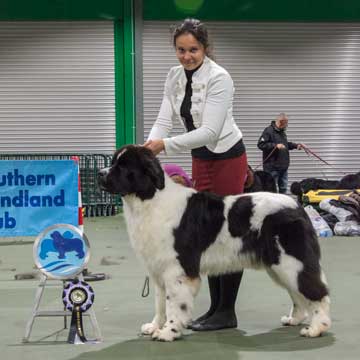 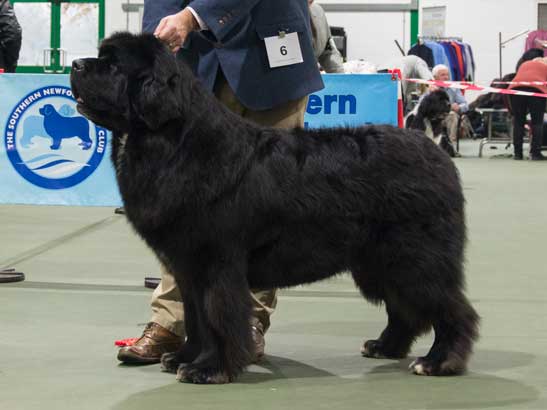 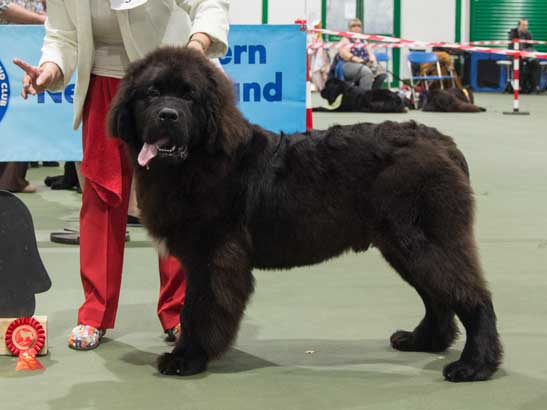 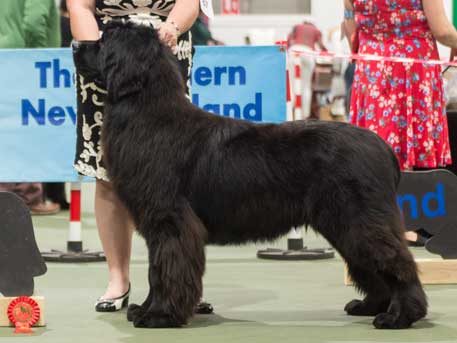 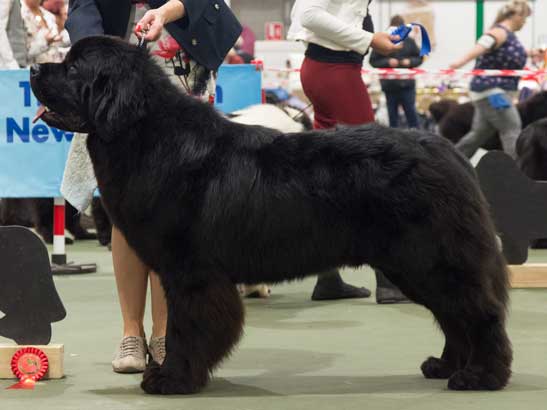 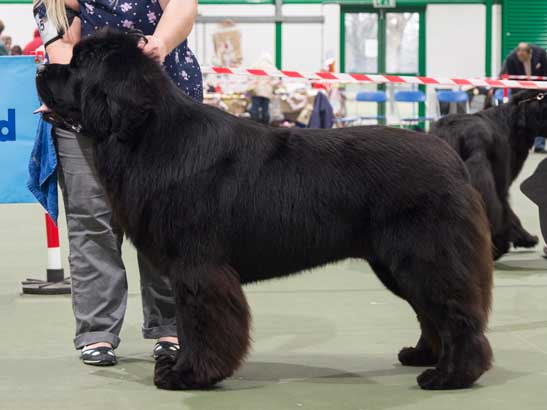 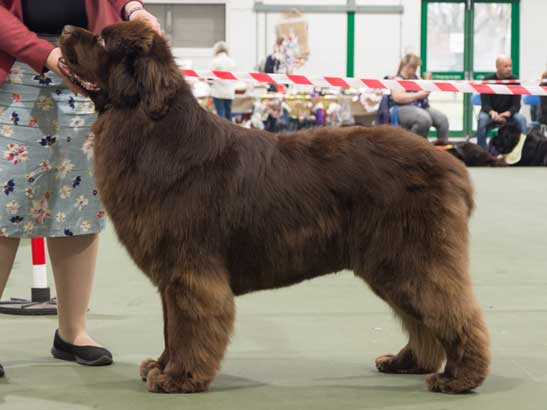 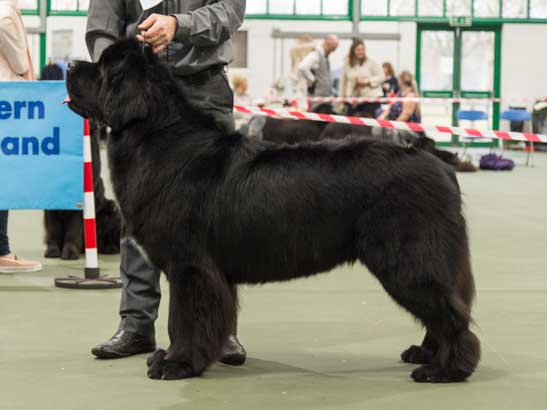 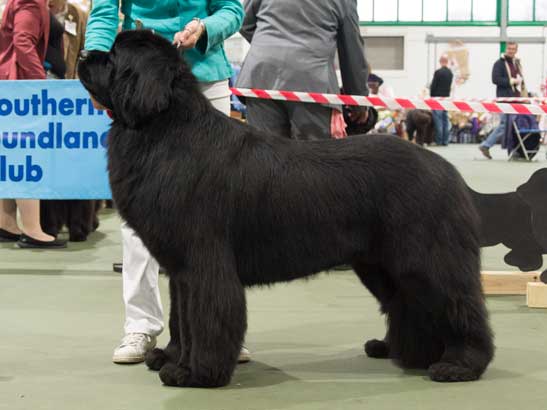 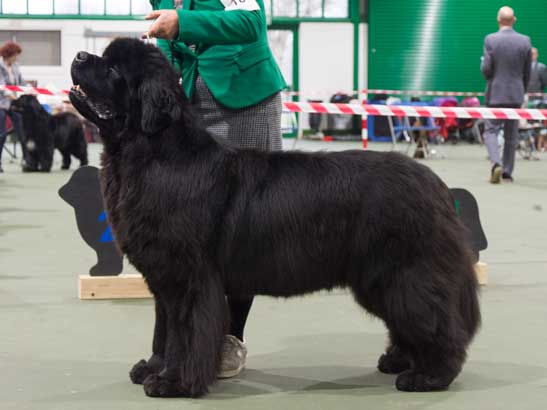 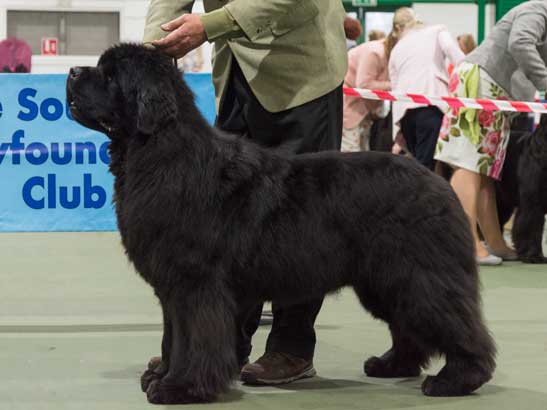 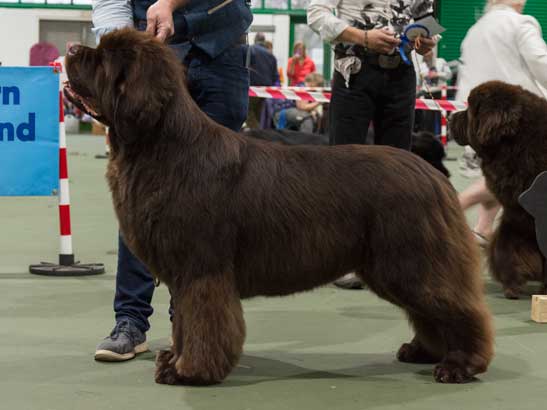 I was very delighted to be invited to judge at this championship show and I was indeed excited to learn that the entry was so good. Thank you for showing your wonderful bitches for me. I truly enjoyed every minute of the judging and I was very pleased to see the overall high quality in your Newfoundlands.

As a judge (and breeder) I appreciate the classical Newfoundland with good size and bone, big cat feet, the very dark eye, and I love a beautifully moving newfoundland with a nice long stride. I was happy to find these traits in most of the dogs I judged. All my class winners were excellent specimens and picking Best Bitch certainly was not easy.

Overall, I found very good type with very typical heads and expressions. If I should mention a few concerns of what I noticed it would be that we're losing size - except for the ears, which are getting bigger along with them being low set. This creates a different, incorrect expression. We need the small ears to frame the face and make the correct expression.

The dogs were shown in excellent condition and grooming and they were all very well presented. All exhibitors were very kind and being good sports, and the atmosphere at the show was very pleasant.

Again, thank you so much for this wonderful experience, which I will remember and treasure for a long time. 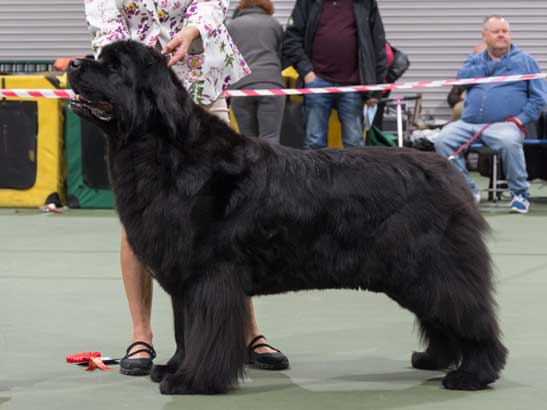 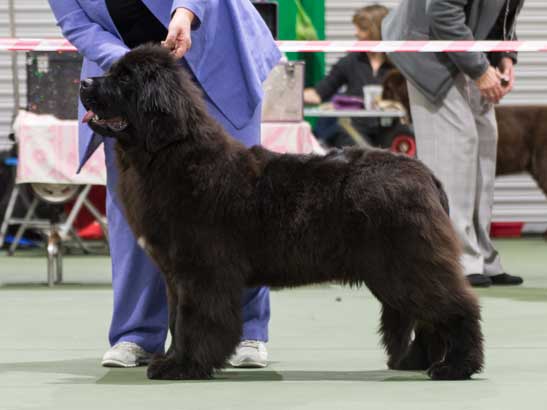 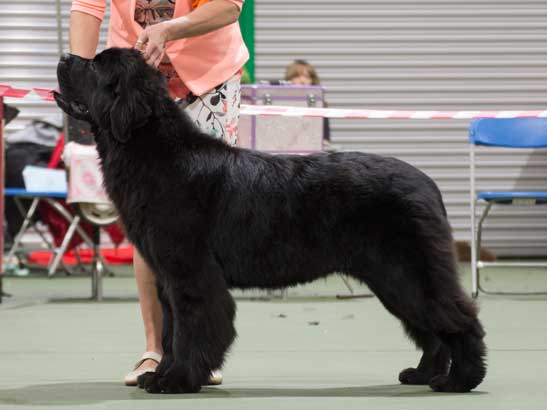 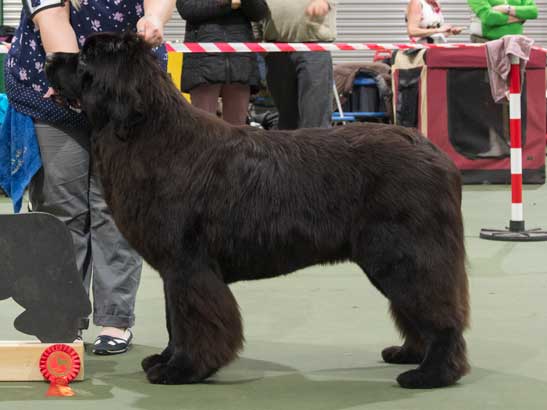 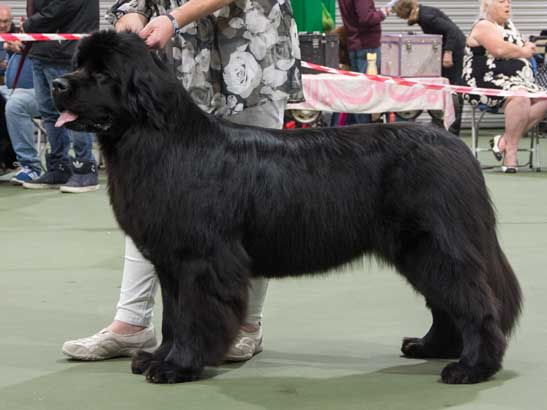 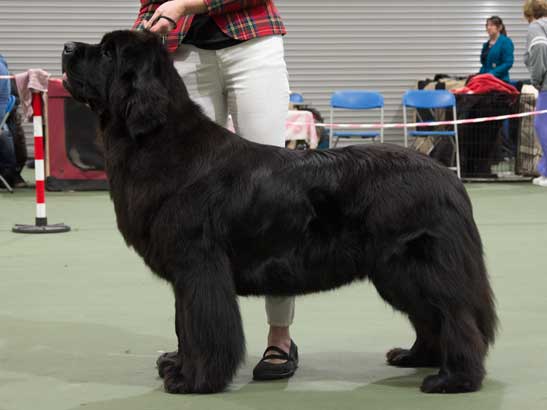 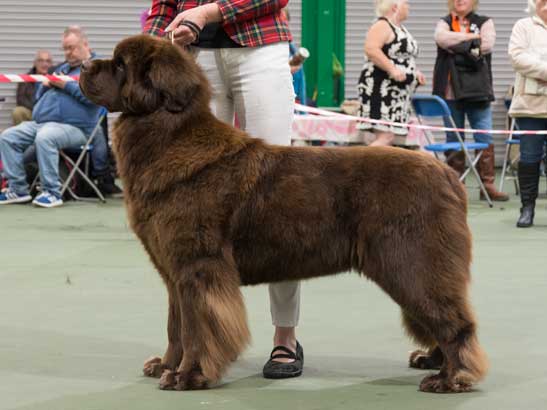 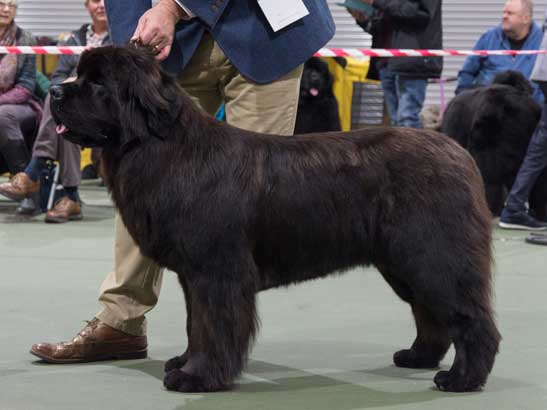 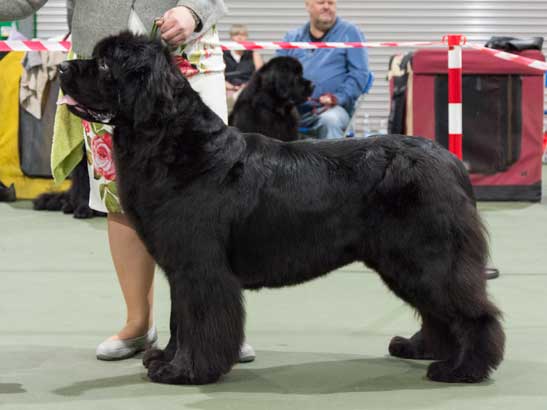 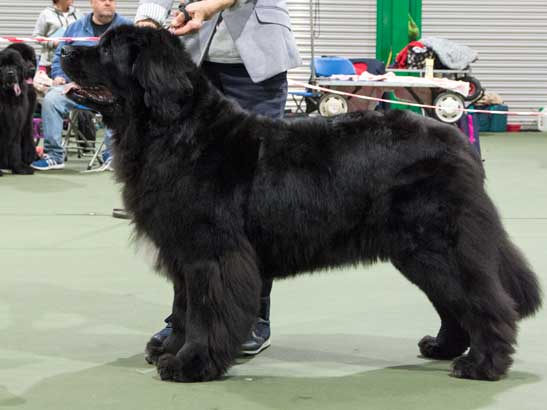 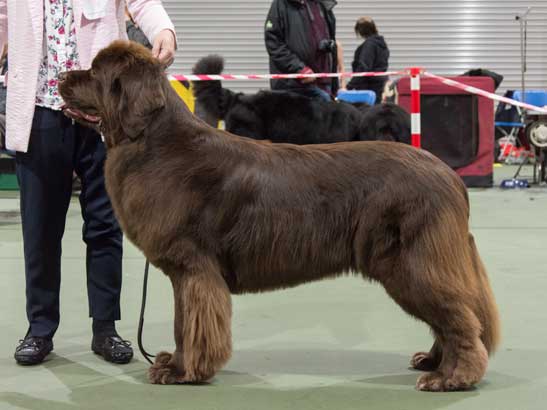 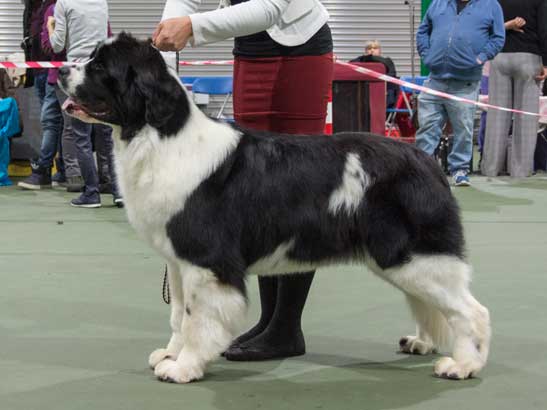